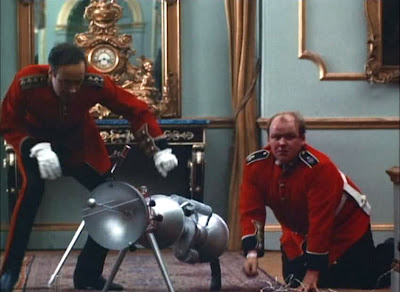 Capitol Records pressed the "Ticket To Ride" single in the US with label copy reading "from the United Artists release Eight Arms To Hold You". By the time it was released on April 19th, that working title had been scrapped, as George Harrison confirmed to Jerry G. Bishop a week earlier.
The new title song, "Help!", was recorded on the evening of April 13th, 1965, a busy day for the Beatles. It began with filming at Twickenham, shooting the "relativity cadenza" scene in the morning, and then being interviewed for Finnish radio as Victor Spinetti, Roy Kinnear, and Leo McKern performed their roles.
The interviews, conducted by Hilkka Kantelinen, were aired on Kaleidoskooppi, and included chats with director Dick Lester and hairdresser Betty Glasow, now becoming a minor celebrity in the world of Beatle radio interviews.
Around 1:45 in the afternoon, the group took a break and piled into a BBC Radio mobile vehicle to speak via telephone with Keith Fordyce for the 100th edition of Pop Inn. Around this time, they also plugged "Ticket To Ride" with Brian Matthew, on the overseas radio series Top Of The Pops.
Posted by DinsdaleP at 3:30 PM