Toppermost of the Poppermost, Part 4 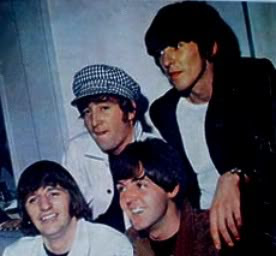 The Beatles' fifth appearance on Top Of The Pops was also their last with new musical content. Episode #32, aired the week of July 3rd, 1965, included two songs from the recent special, The Beatles (Invite You To Take A Ticket To Ride). The third song, "Everybody's Trying To Be My Baby" was reused from the 1964 Top Gear, even though it had been part of the Ticket To Ride show (perhaps because George had sung "Everydobby" in 1965).
Since the host of that show was Denny Piercy, the Fabs sat down with Brian Matthew (date unknown) to tape some chat specifically for this show. Brian also congratulated them on being awarded MBEs in an introduction obviously recorded in late June (the snippet of Beatle dialogue in the intro is mixed in from 1964's Top Gear).
intro/Dizzy Miss Lizzy/chat/Everybody's Trying To Be My Baby/Ticket To Ride/outro
Posted by DinsdaleP at 10:28 PM