Toppermost of the Poppermost, Part 3 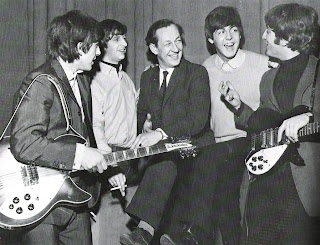 The Beatles' fourth appearance on Top Of The Pops came in episode #15, broadcast the week of March 6th, 1965, while the boys were in the Bahamas filming Help!
The contents were cannibalized from the well-plucked Top Gear of November 17th, 1964, but also from Saturday Club, recorded November 25th. Since both shows had Brian Matthew as a host, it was easy to recycle and combine chat elements from both on the Matthew-hosted TOTP.
Brian even recorded some special dialogue to keep listeners up to date on the status of Ringo's marriage. He also changed a reference to visiting countries on tour "this year" to "last year", seeing as how The Beatles had yet to perform on foreign soil in 1965. "Honey Don't" has been heavily edited compared to its original Top Gear airing. Finally, note a bit of unique dialogue in the introduction about John's colourful wardrobe.
intro/"a creation in green"
chat/Kansas City/Hey Hey Hey Hey!
Honey Don't
Rock And Roll Music/outro
Posted by DinsdaleP at 4:01 PM