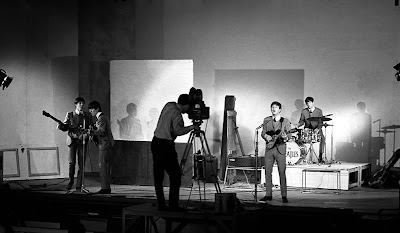 On October 9th, 1963, BBC Television broadcast The Mersey Sound, a documentary on the exploding pop music scene in Liverpool. Naturally, The Beatles were the focal point, and a camera crew followed them around from August 26th - 30th.
On the 26th, footage was shot of the hysterical audience at their concert in the Southport Odeon. The following day, they mimed to several pre-recorded songs onstage at the Little Theatre; although there was no audience present, the crowd from the previous night was spliced into these scenes in the finished product. "Love Me Do" was lip-synced to the original EMI disc, but the other two were new recordings:
She Loves You
Twist And Shout (assembled from several pieces)
On the 28th, The Beatles filmed extensive interviews in a dressing room at the BBC's Manchester studio:
Beatle interviews
Brian Epstein was also interviewed for the program
The final two days of filming took place at various locations around Liverpool. On the soundtrack of this footage was an instrumental version of "I Saw Her Standing There", most likely recorded by The Beatles along with the other songs:
I Saw Her Standing There
Posted by DinsdaleP at 5:46 PM