Toppermost of the Poppermost, Part 2 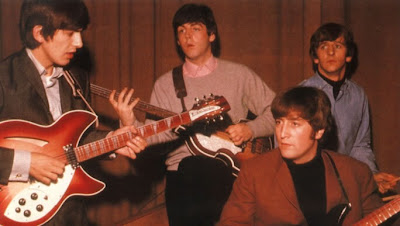 The Beatles' second appearance on Top Of The Pops was in Episode #04, which aired the week of December 19th, 1964.
The material was taken from their November 17th taping for Top Gear, and includes a unique bit of chat with Ringo talking about his "long nose", which wasn't part of the original Top Gear broadcast.
opening/Ringo chat
I'm A Loser
interview/She's A Woman
I Feel Fine/closing
You'll notice at the end that Brian Matthew mentions their return visit in a few weeks' time. This was in Episode #08, broadcast the week of January 16th, 1965. I don't have a copy of this episode, but written records indicate it included a repeat of "I Feel Fine", as well as "I'll Follow The Sun" and "Everybody's Trying To Be My Baby", all borrowed from Top Gear. I suspect the interview portion was John and Paul describing the covers on Beatles For Sale, and George having "a cold and a cough". If anyone has a copy of this Top Of The Pops, please let me know!
Posted by DinsdaleP at 12:56 PM