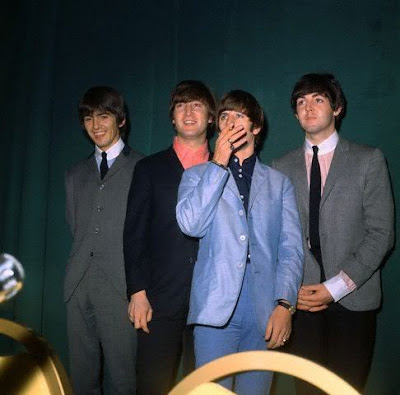 New York City was the site of The Beatles' initial American triumph in February, 1964. Their return in August was heralded by incessant promotions, contests, hype and jingles from local stations such as WABC-AM.
Upon arriving at the Delmonico Hotel in the wee hours of August 28th, the group was mobbed by fans, one of whom tore Ringo's St. Christopher medal from his neck. WABC broadcast pleas for its safe return all morning, and around 4pm, 16-year-old Angie McGowan was able to reunite the medal with its owner - an event aired live by "Cousin" Bruce Morrow and Scott Muni on WABC.
Morrow also spoke with George at some point that day, probably following the group's 5:30 press conference at the hotel's Crystal Ballroom. Outside, a CBS-TV reporter interviewed the hotel's manager about the chaos caused by a Beatle booking.
Of course, the group didn't forget their old pal Murray the "K", chatting with him on WINS-AM. Cross-town rival station WMCA, home of the "Good Guys", managed to grab a promo from Ringo, and covered that evening's concert at Forest Hills Tennis Stadium.
Posted by DinsdaleP at 3:37 PM