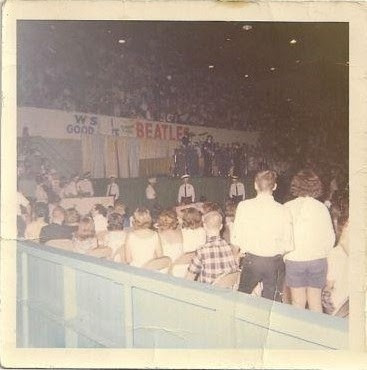 Around noon on August 27th, The Beatles boarded a flight from Denver to Cincinnati, Ohio. KRLA's Dave Hull and Jim Steck were forced to part company with the band at this stage, but not before recording a final message from Ringo.
Being part of the official tour party, Larry Kane had access to the group during flights, but usually left them alone once airborne. But on this occasion, his tape machine was put into service capturing Beatles platitudes to be played back in London at a Melody Maker awards luncheon (they had been voted Best International Group by the paper's readers).
That evening, another press conference took place at the Cincinnati Gardens prior to a concert there, promoted by local radio station WSAI and its "Good Guys" jockeys. Given the Good Guys' prominence on a huge banner behind the Beatles as they played, one wonders who was actually promoting whom at this point.
Posted by DinsdaleP at 2:31 PM