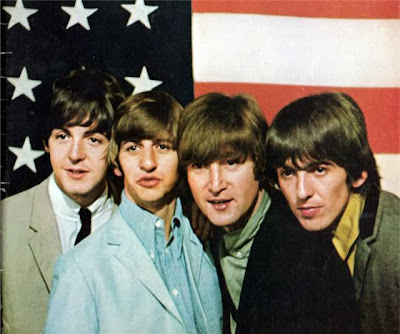 August 25th, 1964 was a bona fide day off for The Beatles. After sleeping in late and lazing by the pool, most of the tour party accepted the invitation to Burt Lancaster's home for dinner and a private showing of A Shot In The Dark.
John remained behind in Bel Air to relax with Derek Taylor, receive guests, and record lengthy interviews with Larry Kane and KRLA-AM's Jim Steck. At some point during the Los Angeles trip, Steck's co-worker Dave Hull also chatted with Paul and Ringo.
The next morning, all four returned to Los Angeles International Airport where KABC-TV filmed their departure. Hull and Steck "stowed away" on the flight to Denver, where Hull was able to gather more interview material.
Ultimately, the Hull/Steck recordings were compiled on Vee Jay's LP Hear The Beatles Tell All, released in early November with bizarre superfluous percussion overdubs. But prior to that, on October 10th, Jim Steck had appeared on American Bandstand and aired clean versions of some of the interviews.
Posted by DinsdaleP at 11:51 AM