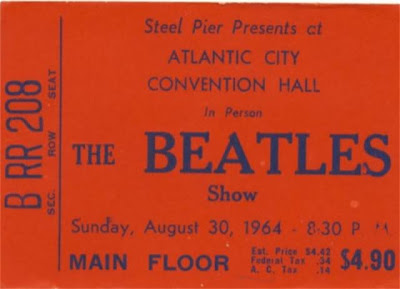 From August 24th through 27th, 1964, the Democratic National Convention was held at the Atlantic City Convention Center. Lyndon Johnson was the party's nomination, but many fans who showed up at the Convention Center three nights later wore "Ringo for President" booster pins.
British news correspondent Peter Woods had been covering the event for ITV, staying at the Lafayette Motor Inn. When The Beatles checked in, naturally he filmed an interview with the band, on the afternoon of the 30th. WABC also filmed some interviews for a TV special, Beatlemania, probably between the press conference and concert. Meanwhile, another film crew interviewed a "fan" on the boardwalk.
The Beatles had two full days off in Atlantic City, August 31st and September 1st, most of which was spent in their hotel rooms playing cards and (naturally) Monopoly. During their stay, Larry Kane chatted with George Harrison, Derek Taylor, and Neil Aspinall.
And for good measure, here's another undated recording from the tour of Paul plugging Cilla Black's "It's For You".
Posted by DinsdaleP at 6:40 PM