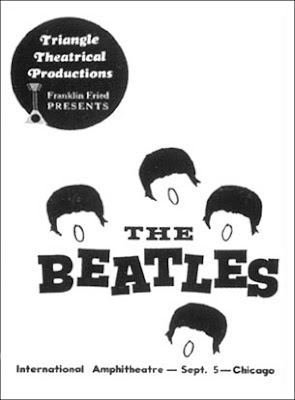 From Milwaukee, it was on to Chicago for a September 5th performance at the International Amphitheatre. Their arrival at Midway Airport was covered by WGN-TV, but wasn't without controversy.
Originally planned for O'Hare, the landing site was changed at the last moment by city officials in an effort to control crowd levels. Unfortunately, some in the media blamed The Beatles for the switcheroo, accusing them of not being fan-friendly. Once they had checked in to the Stockyards Inn, John and an exasperated Derek Taylor gave their side of the story to Larry Kane.
Soon after that, a press conference was held at the hotel in which John, already nursing a sore throat, snapped testily at several of the questions. The concert went off without a hitch, though, and afterwards they boarded a midnight flight bound for Detroit. As the plane waited to depart, freelance journalist Ivor Davis, covering the tour for London's Daily Express, was interviewed by WGN's reporter.
Posted by DinsdaleP at 8:02 PM