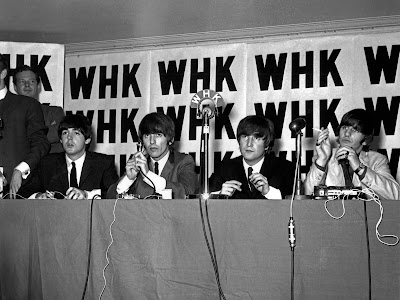 With the North American tour just five days from completion, Beatlemania finally burst at the seams in Cleveland on September 15th, 1964.
The initial press conference at the Sheraton Hotel was routine enough, and it was followed up by a second media event, with the band meeting WHK radio contest winners. They were also interviewed by Don Webster, host of WEWS-TV's pop music series, Upbeat.
Elsewhere, Derek Taylor and Brian Epstein sat for WKYC-TV's interviewer and expounded on the group's unflagging success. Another TV crew spoke with fans outside the hotel, and with Liverpool Echo correspondent George Harrison (no relation).
The concert, at the Public Auditorium, went as scheduled until the third number, "All My Loving", when a number of fans broke through the police cordon and rushed the stage. Deputy Inspector Carl Bare immediately took matters into his own hands, commandeering the microphone mid-song to announce that the show was over. Four reluctant Beatles headed backstage and registered their disgust to KYW radio listeners, thanks to Art Schreiber who phoned in a live report from the dressing room.
Once calm had been restored, thanks to Derek Taylor's appeal to the audience to behave, the performance continued. But as a result of the "pandemonium", Mayor Ralph Locher banned rock groups from playing at the Public Auditorium.
Posted by DinsdaleP at 3:40 PM