Rock And Roll At The Hollywood Bowl 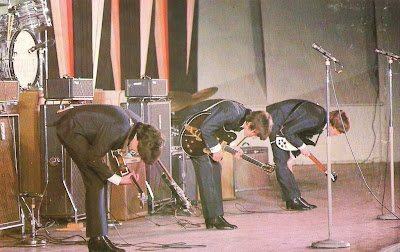 Of all the concerts on the summer 1964 tour, The Beatles were most anxious about their August 23rd performance at the Hollywood Bowl. Not only was it a prestigious venue in a major media market, but Capitol Records would be recording the event for posterity.
The Bowl had been personally booked by KRLA disc jockey Bob Eubanks, who obtained a $25,000 loan against his home to secure the date. His foresight paid off when all the tickets sold as early as April. Eubanks presided over the pre-show press conference at his nightclub, the Cinnamon Cinder, and then introduced the band onstage.
Another KRLA DJ, Dave Hull, spoke with Ringo after the press conference. Backstage at the Bowl, Larry Kane interviewed a pair of female fans; meanwhile in New York that night, Ed Sullivan introduced a rerun of The Beatles' February appearance.
Posted by DinsdaleP at 2:49 PM