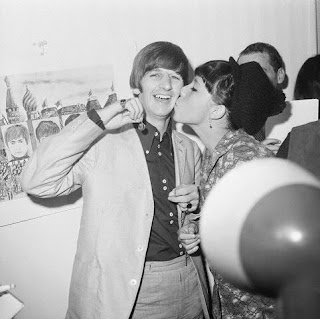 As The Beatles pushed their way through the mob outside the Delmonico Hotel in the pre-dawn hours of August 28th, 1964, a zealous fan tore Ringo's St. Christopher medal from around his neck.
Since it had been a 21st birthday gift from his aunt, Ringo was eager to get the medal back, and WABC's Cousin Bruce Morrow and Dan Ingram helped him broadcast this plea for its return, offering the chance to meet Ringo as a reward.
It didn't take long for 16-year-old Angie McGowan to fess up, and along with a couple of friends, she was escorted up to the suite late that afternoon to meet the just-risen Ringo and bonus Beatle Paul. WABC had Cousin Brucie, Dan Ingram, and Scott Muni broadcasting live on both radio and TV to cover the exchange.
Posted by DinsdaleP at 6:44 PM