I Don't Want To Go On The Cart! 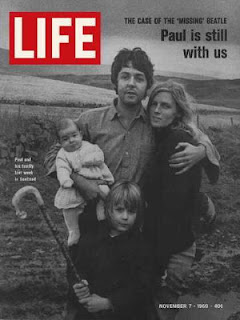 In October, 1969, Paul McCartney found himself in the unenviable position of having to prove to the world that he wasn't dead. Despite being on holiday with his wife and newborn daughter in Scotland, he allowed BBC Radio reporter Chris Drake to visit the McCartney farm. The interview, conducted October 24th, was aired in fragments of different lengths on various news bulletins and programmes. Here is a composite recording of all known pieces, longer than what is included on Darthdisc's excellent Misshimmisshimmisshim set (Paul discusses some of the specific "clues"):
I'm not quite dead
Posted by DinsdaleP at 1:26 PM