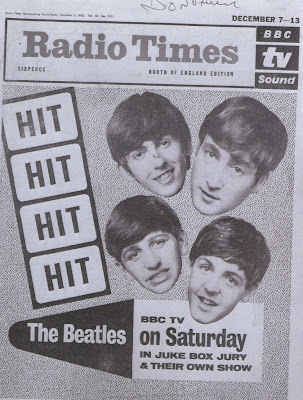 After John's successful if controversial appearance on Juke Box Jury, it was natural for BBC TV to request all four Beatles to fill the show's panel. The network got a 2-for-1 deal by staging the show in Liverpool at the Empire Theatre, followed by the taping of a live performance in the same venue.
Both shows aired later that night, December 7th, 1963, first Juke Box Jury and then the concert special, It's The Beatles! The group watched both telecasts backstage at their Liverpool Odeon show, dismayed by the shoddy sound and camerawork on the latter recording.
Posted by DinsdaleP at 2:42 PM