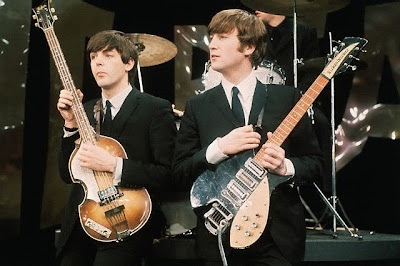 George woke up on the morning of February 8th, 1964 with an elevated temperature and flu symptoms. Bedrest was ordered, so he stayed in the Plaza Hotel while his bandmates took publicity photos in Central Park.
Before they departed, John and Ringo spoke via telephone with Bud Ballou of WOLF-AM in Syracuse. The Maysles brothers followed John, Paul, and Ringo to Central Park and on their limo trip to CBS Studios, filming all the while.
Meanwhile, George manned the phones from bed, chatting with self-proclaimed "fifth Beatle" Ed Rudy and WSPR-AM's Jack Diamond. By late afternoon, he was declared well enough to join the others and Ed Sullivan to pose for photos (Neil Aspinall had stood in for him during camera rehearsals). Back at the Plaza that night, all four called in to Murray's Swingin' Soiree show and schooled him in British teenage lingo.
Posted by DinsdaleP at 3:06 PM