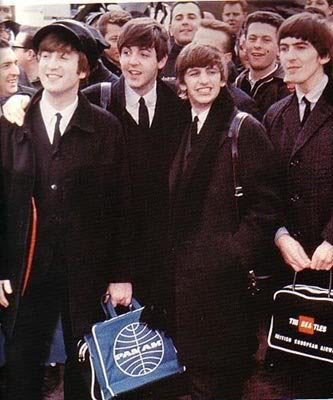 Pan Am flight 101 landed at New York's Kennedy Airport just before 1:30 pm on February 7th, 1964. The four Beatles stepped off the plane and squinted into the midday winter glare, scarcely believing what they saw.
Thousands of wailing, sobbing, waving teenagers. AMERICAN teenagers, lined up six deep just to welcome them to the New World! Also present were dozens of media representatives, from newspapers, radio stations, newsreel companies, magazines, and television, capturing the spectacle in words, sounds, and photos, and waiting to hear what the long-haired quartet had to say.
Plenty, as they found out in an exhilarating and chaotic press conference, held in the Pan Am lounge and haphazardly presided over by Beatles press officer Brian Somerville. Outside, it was the fans' turn to speak, to the Mutual Broadcasting System, newsreel stringers, and WINS-AM radio's Paul Parker.
WINS's coverage was at the forefront, thanks to disc jockey Murray the "K" Kaufman, who caused trouble at the press conference by hogging the spotlight, and then interviewed the group in their Plaza Hotel suite while his colleague Jim Gordon covered the scene in the streets below. Naturally, the newsreel teams also followed the crowds to the Plaza.
The stunned but increasingly wearied Beatles, including an ailing George Harrison, then chatted via international phone call with Brian Matthew, back in London taping an insert for the next morning's Saturday Club. The Maysles brothers were also present, filming the phone call and other activity in the hotel rooms for their remarkable documentary, What's Happening! The Beatles in the USA.
No wonder the main impression John, Paul, George, and Ringo had of America was mass media oversaturation. This was only day one!
Posted by DinsdaleP at 5:18 PM