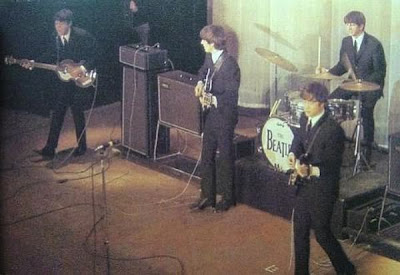 With anticipation reaching a fevered pitch in the USA for The Beatles' visit, particularly after "I Want To Hold Your Hand" topped the Billboard and Cash Box charts, several American reporters made the pilgrimage to Paris towards the end of January, 1964.
Group W radio correspondent Bernard Redmont recorded an interview with the group at the George V hotel for broadcast on Chicago's WIND-AM, in a program entitled Fake or Phenomenon. Portions of the interview were also used in a WINS New York special hosted by Murray the "K" (much more on him soon).
Posted by DinsdaleP at 1:45 PM