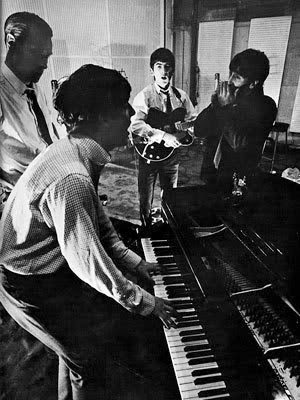 The Beatles spent September 12th, 1963 at Abbey Road Studio 2, taping songs for their second LP, With The Beatles. The only reel to have survived from the album's sessions contains several takes of "Hold Me Tight" and "Don't Bother Me", but it opens with some messages taped specifically for broadcast in Australia.
By the release of "She Loves You", Beatles music had broken through Down Under, thanks to deejays like Bob Rogers of 2SM in Sydney. Reading from a prepared script while gobbling down canteen chow, the Fabs sent greetings to Rogers and Australian fans in general.
Bob Rogers - take 1
Bob Rogers - takes 2 + 3
Open Message - take 1
Posted by DinsdaleP at 3:47 PM