From The Top, Johnny! 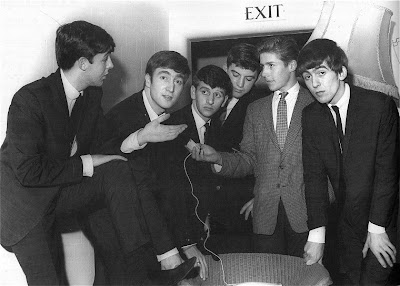 To kick off the new year, I'm taking a new approach to posting Beatles interviews and spoken recordings. Rather than jump back and forth through history, I'm starting at the beginning, with this recording from October 27th, 1962, and will proceed chronologically through April, 1970.
This earliest surviving Beatle interview recording was conducted by Monty Lister (with assistance from Peter Smethurst and Malcolm Threadgill). It was broadcast on Sunday Spin, an in-house programme for Cleaver and Clatterbridge Hospitals. As he notes, Ringo has only been in the group for nine weeks at this point, and the others have an equally fresh and non-cynical approach to the enterprise of self-promotion. Things would change over the next few years.
First released on a flexidisc with Mark Lewisohn's book The Beatles Live in 1986, I'm proud to present a previously unreleased and unbootlegged source tape for this historic interview, with a couple of extra seconds at the top and tail:
Sunday Spin
Posted by DinsdaleP at 7:06 PM