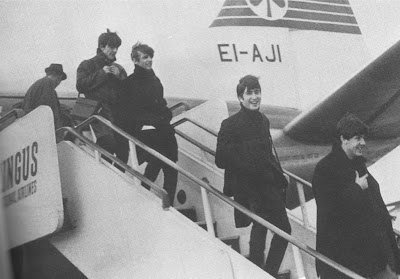 The Beatles' sole touring visit to Ireland kicked off November 7th, 1963, as they flew from London to Dublin for a performance at the Adelphi Cinema. After they deplaned, reporter Frank Hall filmed an interview with the group for In Town, broadcast that evening on RTE.
The following day, they drove to Belfast for concerts at the Ritz Cinema. Somewhere along the route, they pulled over and met Ulster Television reporter Jimmy Robinson, who filmed a brief roadside chat with the pop combo for airing on that night's local newscast.
Posted by DinsdaleP at 12:52 PM