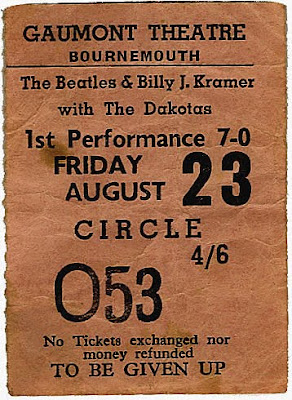 The Beatles' summer of 1963 wound down with a six-night residency at the Gaumont Cinema in Bournemouth. Between shows on August 23rd, they were interviewed by Swedish radio producer Klas Burling, fast becoming a big Beatle booster in his home country.
During the interview, Ringo says they won't have time to visit Sweden until 1964, but within weeks, a short tour was arranged for the end of October. Burling would introduce the group's Swedish radio and TV performances, and interview Paul and Ringo again at the end of the visit.
Posted by DinsdaleP at 2:30 PM