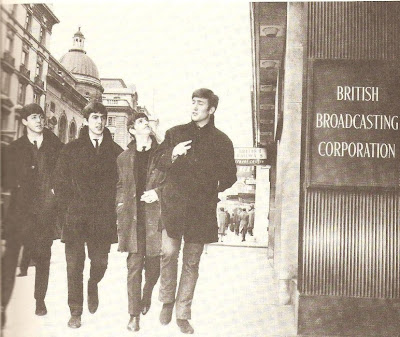 The Beatles performed on BBC Radio on a regular basis throughout 1963, usually bantering with presenters such as Rodney Burke and Brian Matthew. As a rule, I won't be uploading all these chat pieces during musical appearances (they can be found on the excellent Unsurpassed Broadcasts collection).
Here is an exception to that rule. On April 3rd, 1963, The Beatles recorded a live set for Easy Beat at the Playhouse Theatre in London. John and Paul also participated in the show's record review feature, "Going Up?", alongside singer Laura Lee and Clare O'Rourke. Enjoy this previously unbootlegged fragmentary off-air recording of this segment, with the boys reviewing discs by Bert Weedon, Cleo Lane, the Vernons Girls, and tourmate Tommy Roe.
Going Up?
Posted by DinsdaleP at 10:07 AM