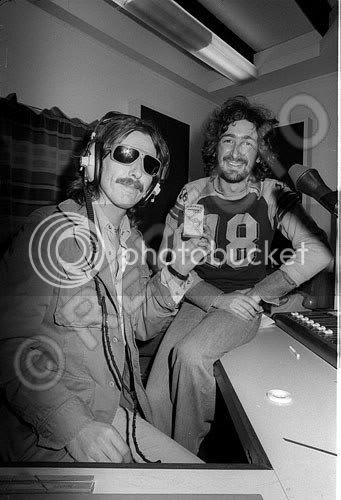 George's new single, "You", was released September 15th, 1975 in the US, followed a week later by the LP Extra Texture (Read All About It). In four years, George had fallen from most commercially successful ex-Beatle to least, and sadly, the new releases did nothing to change that status.

"You" was easily the catchiest, most upbeat number on the album (unsurprisingly, it had been written and recorded back in February 1971 as a potential Ronnie Spector track), but the single could manage only #20 and #38 placements on the US and UK charts, respectively. The rest of the LP was very much a product of mid-70's Los Angeles studio rock: slickly played but bland and uninspired, and the lyrical content was somber and pessimistic.

George did a bit of promotion in the UK which helped boost the album to #16 (whereas Dark Horse had failed to chart). He gave a lengthy interview to Melody Maker, and appeared live with DJ Nicky Horne on Capital Radio's Your Mother Wouldn't Like It on September 12th. George also went through the album track-by-track with Paul Gambaccini for BBC Radio 1's Rockweek, aired September 6th.

Throughout 1975, George had been making his share of contributions to his friends' projects. Billy Preston's LP It's My Pleasure was released June 20th, featuring George's guitar on the song "That's Life". Billy had been performing the song most nights on the Rolling Stones' summer US tour:

British singer-songwriter Peter Skellern was also the recipient of a Harrison guitar solo, on the song "Make Love, Not War". The cut was released September 26th on the UK-only album Hard Times:


Throughout the rough period of 1974-75, George could always count on one thing to lift his spirits, and that was Monty Python. He had been enjoying the troupe's BBC TV sketch comedy since its inception in 1969, and after the final series aired in December 1974, he set about making friends with the group's members.

He had met Michael Palin and Terry Jones briefly in November 1972 when Apple Studios was used to cut a version of Monty Python's Previous Record, but his first and fastest Python friend became Eric Idle. The two met when George attended a screening of Monty Python And The Holy Grail in Los Angeles during March 1975 and bonded instantly.

George had been using the "Lumberjack Song" as pre-concert music during his Dark Horse tour, and agreed to produce a new recording of the number for release as a UK Christmas single. The session took place October 3rd at Workhouse Studios in London, with Michael Palin reprising his role from the TV version; Idle, who usually performed the tune in Python stage shows, was content to watch from the control booth. George mixed the song the next day at FPSHOT and the single was released November 14th:

Posted by DinsdaleP at 1:58 PM