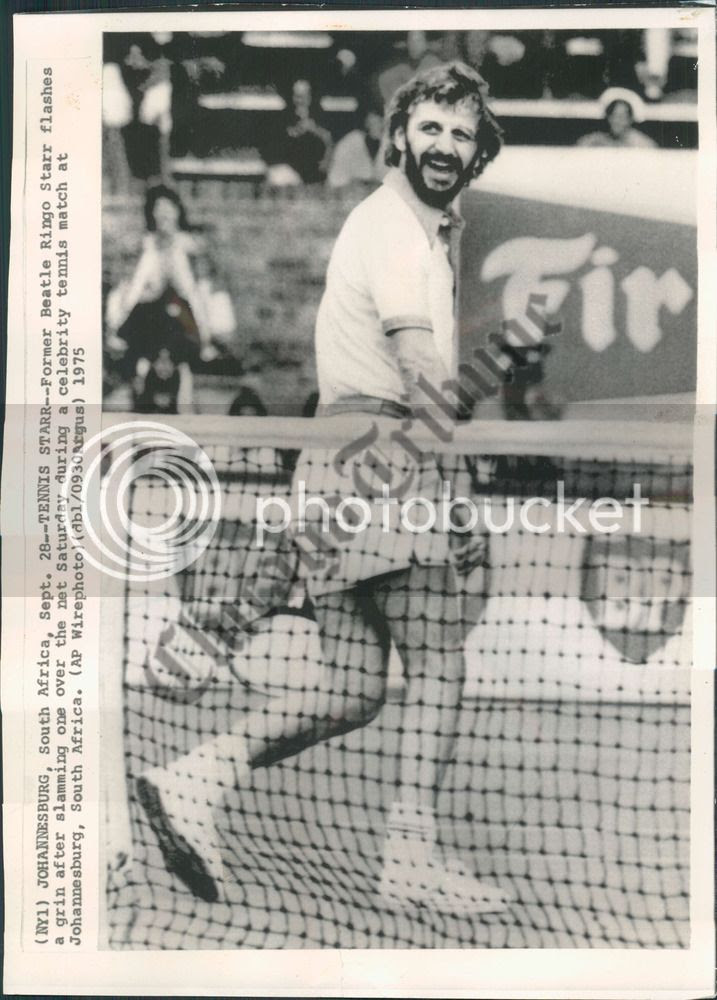 October of 1975 found the ex-Beatles scattered around the globe. Ringo was the most active, participating in a celebrity tennis tournament in Johannesburg September 27th, flying to Los Angeles in October to attend Dr. John's concert at the Roxy Theater, and visiting Vancouver later in the month. He may also have attended the world premiere of Lisztomania in New York on October 10th:

George Harrison was back in Los Angeles promoting Extra Texture; on October 16th, he was in the audience at one of Bruce Springsteen's legendary shows at the Roxy. During his Los Angeles visit, George was interviewed by Don Ellis about Ravi Shankar's music - specifically, the Music Festival From India, which would be released as an LP by Dark Horse in the US on February 6th, 1976. The interview was aired on KCET in March.

Paul and Wings were at EMI Studio 2 in London recording tracks for their next LP, Wings At The Speed Of Sound. At the end of the month, the group would fly to Australia for the next leg of their Wings Over The World tour. On the evening of October 17th, disc jockeys Ronnie Sparks and Tim Webster of 2SM in Sydney phoned Abbey Road and gave Paul and company a chance to promote the upcoming concerts. Paul failed to rise to the occasion, having little or nothing interesting to say about his previous albums.

John spent a weekend in Massachusetts during September, visiting Cape Cod and Martha's Vineyard, before returning to the Dakota for the final weeks of Yoko's pregnancy. On September 23rd, good news in the deportation case arrived in the form of a temporary stay, reportedly on humanitarian grounds due to Yoko's impending delivery. Even better news was handed down the the court of appeals on October 7th, when the deportation order was reversed by a 2-to-1 decision. John's next step was to apply yet again for permanent residence in the US. The best news of all came on John's 35th birthday, October 9th, when a healthy baby son, Sean Taro Ono Lennon, was born at New York Hospital.

While John was now effectively retired from the music business, he did assist EMI in compiling one last release before his contract expired. Shaved Fish was the first greatest hits package by an ex-Beatle, collecting most of John's singles (plus a bit of the unreleased One-To-One benefit performance of "Give Peace A Chance"). The album was released October 24th in the UK, accompanied by a single, "Imagine"/"Working Class Hero". EMI's Bob Mercer had urged John to release "Imagine" on 45 in the UK (it had been a US-only single back in 1971), where it and the LP both peaked at #5. Shaved Fish reached #12 in the US, eventually going platinum.

Posted by DinsdaleP at 3:46 PM