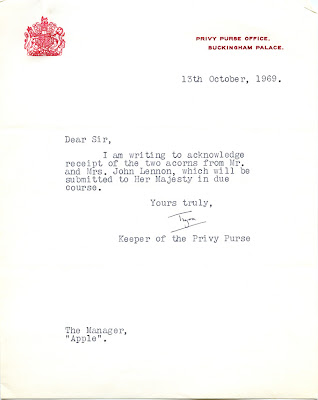 On John Lennon's 29th birthday, Yoko Ono checked in to King's College Hospital due to complications with her pregnancy. Sadly, she miscarried three days later, derailing the couple's second attempt at having a child.
After resting for a week or so, she and John were back at Apple plugging their newest batch of Plastic Ono Band releases: the "Cold Turkey" single was issued October 24th, 1969 in the UK, with the Live Peace In Toronto album scheduled for November 14th (but delayed until December). Also out was their Wedding Album, a deluxe package covering their Amsterdam honeymoon/Bed-In (released October 20th in the US and November 7th in the UK).
John and Yoko recorded a radio commercial to plug the LP, and then met with journalists to talk up all these projects. On October 21st, they chatted with David Wigg for Scene And Heard; here is a composite of the raw tape and the October 26th BBC Radio 1 broadcast. Most likely recorded the same day is this interview for Dutch radio, in which John mentions the budding "Paul Is Dead" rumor. A second low-quality off-air recording from Dutch radio may stem from the same broadcast.
Posted by DinsdaleP at 11:18 AM