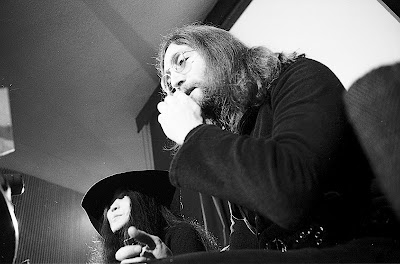 The Lennons' last great push for peace took place in Canada the week before Christmas, 1969. On December 16th, they flew from London to Toronto and were driven to the home of Canadian rocker Ronnie Hawkins, who lent them his farmhouse as a base for their operations during the week.
The first event was a press conference on the 17th at the Ontario Science Center, where John and Yoko announced vague but ambitious plans for a three-day Peace Festival to be held at Mosport Park (a racetrack) in July 1970. Arguments with the promoter, John Brower, meant that the festival never took place, but the couple were optimistic about the prospects for "Year One A.P. (After Peace)". Here is a 55-minute composite recording of the press conference, from several sources.
That evening, John and Yoko welcomed Village Voice reporter Howard Smith to the farmhouse for a dinner-time interview covering dozens of topics: the "War Is Over" posters and peace festival, their recent trips to Greece and India, prospects for future Beatle tours, the MBE return, the Hanratty case, and more. The recording was broadcast on WABC radio in New York; as it lasts nearly 90 minutes, here it is in nine pieces:
Part One
Part Two
Part Three
Part Four
Part Five
Part Six
Part Seven
Part Eight
Part Nine
Posted by DinsdaleP at 1:12 PM