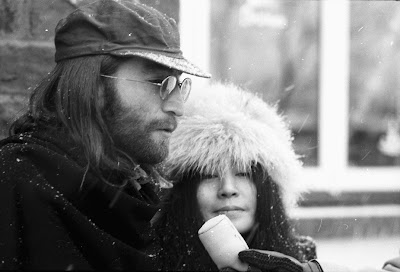 Day 2 in Canada (December 18th, 1969) was set aside for various reporters and journalists to visit John and Yoko at Ronnie Hawkins's farmhouse in Mississauga. They actually began the day by taping a message to fans in Japan, mostly spoken by Yoko in Japanese with John playing various riffs and songs on acoustic guitar in the background. This was released as one side of an extremely limited LP, Love And Peace, apparently issued by Yamaha.
CBC Television had a camera crew filming for several purposes. The first was an interview with Nick Steed and Ken Cavanaugh for the TV show CBC Weekday, aired that night. CBC was also producing a documentary, A Visit For Peace, which included another farmhouse interview along with footage of the previous day's press conference and John and Yoko riding a Motoski through the snow.
A reporter ("Bob") questioned John and Yoko the same day for an Associated Press newsreel, and yet another filmed interview at the farmhouse found John talking with a Canadian broadcaster about the promotional film for "Cold Turkey".
Posted by DinsdaleP at 9:52 AM