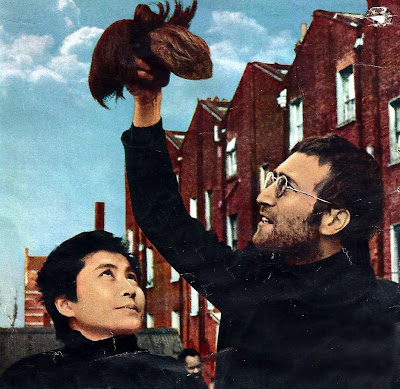 In a burst of inspiration the day after his return to London, John wrote a new song, "Instant Karma! (We All Shine On)", gathered a new Plastic Ono Band at EMI Studios, and recorded the number, all on January 27th, 1970. Ten days later, the single went on sale in UK shops, and John and Yoko set out on another round of publicity (although all their promotional tours were blending into each other by this point).
Around the 30th of January, they were interviewed by David Bellan for the BBC World Service radio show Profile. On February 4th, they held a ceremony on the roof of London's Black Centre, where they donated their shorn hair to activist Michael X. Media reaction was sparse, but ITV News did send Peter Sissons to cover the latest "Lennon stunt".
February 6th saw the couple participating in another interview with David Wigg for Scene And Heard, broadcast on Radio 1 February 15th. And on the 7th, they joined Michael X in taping an appearance on London Weekend Television's Simon Dee Show, aired the following night.
Posted by DinsdaleP at 11:40 AM