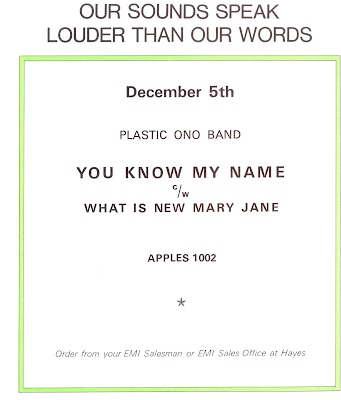 On November 26th, 1969 at EMI, John, Yoko and friends had gathered to overdub yet another layer of cacophony to their 1968 recording "What's The New Mary Jane". The new mix, coupled with another Beatles reject dating back to 1967, "You Know My Name (Look Up The Number)", was scheduled for release on December 5th as a Plastic Ono Band single on Apple.
Whether John changed his mind or the other Beatles rejected the idea, the single was cancelled. Perhaps he was worried about a product glut, with "Cold Turkey", the Wedding Album, and Live Peace In Toronto all hitting the stores in an eight-week period. Also available as of December 12th was the long-delayed charity LP No One's Gonna Change Our World, featuring another Beatle leftover from 1968, "Across The Universe". Here is a December '69 aircheck of the song on WKBW in Buffalo (as the LP wasn't sold in the US, they were able to claim an "exclusive").
George spent the first half of December as guitarist on the Delaney & Bonnie & Friends tour across the UK and into Denmark. Several concerts were recorded professionally for release on an Atco LP, including the December 7th shows in Croydon. The MC's band introductions heard on the LP excises George's name, most likely for contractual reasons (he is credited on the sleeve as "Mysterioso"); here is the unedited introduction from the soundboard tape, including mention of George.
Meanwhile, Paul was keeping quiet at his home in London, contemplating his first solo LP, and Ringo was moving into a new house near Highgate. John and Yoko kept up their media blitz, calling for the reopening of the case of James Hanratty, hanged for murder in 1962. On December 10th, the Lennons posed for photos with Hanratty's parents and proselytized for peace in a filmed interview.
By far the most entertaining Lennon interview of 1969 was taped in early December for a radio documentary on the history of popular music, Pop Goes The Bulldog. John spoke at length and quite expertly with Don Chandler about the evolution of Beatle music, from skiffle, country, and R&B through Elvis and Little Richard, and up to John Cage and Stockhausen.
Posted by DinsdaleP at 3:41 PM