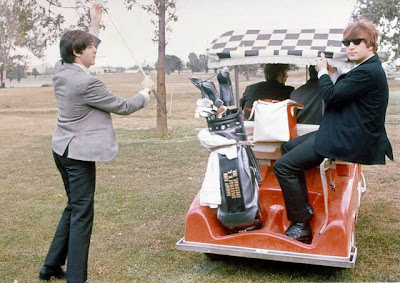 The Beatles landed at Weir Cook Airport in Indianapolis around 1am on September 3rd, flying in from Philadelphia, and checked in to the Speedway Motel. Once they arose that afternoon, KYW-AM's Art Schreiber was invited up to the rooms to chat with John and Ringo. Oddly, there are no Larry Kane interviews from this date, apart from a brief backstage chat with Bill English, singer for opening act Bill Black's Combo.
Their airport arrival, the first of two concerts at the Indiana State Fair Coliseum, a between-shows press conference, and the following morning's departure were all filmed by local station WISH-TV for a documentary, Our Fair Beatles, which aired September 9th. Ex-Liverpudlian reporter Bill Aylward also interviewed the quartet following the conference.
Posted by DinsdaleP at 2:51 PM