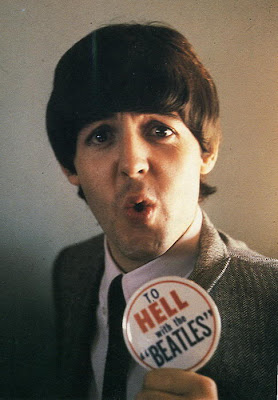 "On September 4, 1964, The Beatles gave a concert in Milwaukee, Stop Number 12 on their first American tour which visited 25 cities, from San Francisco to New York. It was the only time the group appeared in Wisconsin.
Prior to the concert, Harrison, McCartney, and Starr gave a press conference hosted by Barry. Lennon, nursing a sore throat and saving himself for the show, wasn't present.

When a reporter asked whether they were aware of Milwaukee prior to the gig, Starr replied quickly in his Liverpool accent, "I've 'eard of the beer that made it famous!" In response to, "Have you gentlemen given any thought to what you will do after the bubble bursts?" Harrison riposted, "Ice hockey" and McCartney, "Ringo originally wanted to own a string of hair-dressing salons."

Another reporter queried, "Do you yearn for a good haircut?" Harrison said, "No, thank you," and Starr, "Do you?"
Showing the proclivity to question authority that was part of the band's persona, there is sharp criticism of the Milwaukee Police, then led by Harold Breier who became chief earlier that year on March 17.

The Beatles were unhappy because they said after landing at Mitchell Field, police forced them to leave the airport for their hotel through an out-of-the-way gate, bypassing the hundreds of fans who had assembled near the main exit:

Reporter: "We have been told by the police department here that the decision to land where you did was made by your manager in the air."

Unidentified Beatles Staffer (possibly Derek Taylor, the group's long-time press contact): "Whenever possible and even when it's almost impossible, The Beatles would always rather land in front of the terminal and be met by the kids who have been decent enough to come there. We never ever make the decision ourselves in midair or on the ground to avoid the fans. Ever."

McCartney: "And actually we were told as soon as we got on the ground today. One of the men from the agency came on board and said the police had said this. So we sent him back again. Go and ask the police chief again if we can just at least drive past the fans, you know, in the car, which is the least we can do. And again they told us, no. And he's a dirty, lying policeman who told you that." "
Source: http://www.fab4milwaukee.com/
Here are brief TV clips of the airport arrival and Lennon-less press conference, and Larry Kane's Milwaukee interview with Paul, at the Coach House Motor Inn.
Posted by DinsdaleP at 3:55 PM