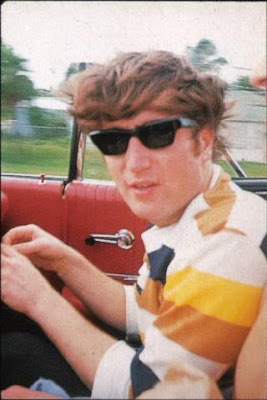 After their Montréal concerts, The Beatles were due to fly south to Jacksonville, Florida for two days of rest before their September 11th performance at the Gator Bowl.
Hurricane Dora threw a wrench into those plans, forcing them to fly all the way to Key West, where they enjoyed a couple of relaxed days at the Key Wester Hotel. By the morning of the 11th, they were clear to fly to Jacksonville, where their rooms at the George Washington Hotel weren't quite ready. They had an impromptu lunch of chicken sandwiches while chatting with the press, including reporter Jean Morris (no relation to Boris).
The concert was memorable for the high winds, remnants of the hurricane, and for Derek Taylor's on-stage threat to cancel the show if a certain unauthorized film crew didn't leave immediately. Taylor spoke with Larry Kane on that night's flight to Boston about the showdown.
Elsewhere (on dates unknown), Kane chatted with fellow reporter Ivor Davis and had Ringo say hi to Greg.
Posted by DinsdaleP at 2:57 PM