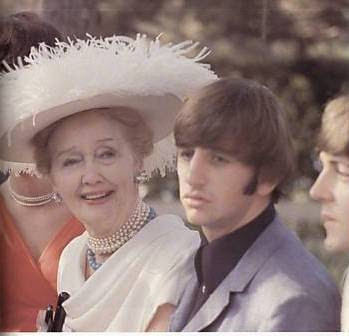 After five straight days of travel and concerts, The Beatles' tour machine paused on August 24th and 25th so that the boys could enjoy a couple of days in the California sun at a rented Bel Air mansion (owned by British actor Reginald Owen).
Which isn't to say they had no obligations - in fact, on their first "day off", they attended a celebrity garden soiree in support of the Hemophilia Foundation of Southern California. KCBS-TV reporter Saul Halpert filmed an interview with Derek Taylor in Bel Air, and then captured the band's arrival at the Brentwood party. The charity event, at which The Beatles reluctantly shook hands with movie stars' children for an hour or so, was held at the home of the mother-in-law of Capitol Records' president Alan Livingston.
Capitol also dispatched producer Jack Wagner to Bel Air in hopes of recording some material for various promotional purposes. George and Ringo occupied themselves at the mansion's large swimming pool while John and Paul sat down inside with Wagner and a tape recorder. Previous blog posts have highlighted their Silver Platter Service/Teen Set interview, and Paul's contribution to Here's To Veterans.
Also taped that day was The Beatles Introduce New Songs, a promo single on which composers Lennon and McCartney introduced and back-announced new singles from Cilla Black and Peter and Gordon. Meanwhile, Capitol was assembling material for their own documentary double LP, The Beatles' Story, including fan interviews from Los Angeles and other cities.
Posted by DinsdaleP at 11:16 AM