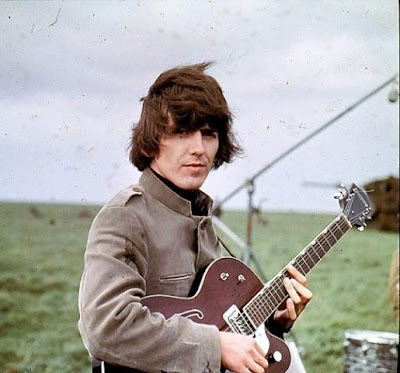 Cleveland disc jockey Jerry G. Bishop would accompany The Beatles on their August 1965 North American tour, but a few months earlier, he had the opportunity to speak with George Harrison.
During the filming of Help! in mid-April 1965, Bishop placed a call to Twickenham Film Studios and was able to chat with George, a "slow eater", in the studio canteen after the others had finished lunch. Also on the line with Bishop was teenage fan Debbie Kreuger, who asked a few questions. It's interesting to hear George confirm that Eight Arms To Hold You is no longer the film's title, but that the new one hasn't been decided just yet (which places this interview just prior to April 13th, when the title song "Help!" was recorded).
Posted by DinsdaleP at 1:57 PM