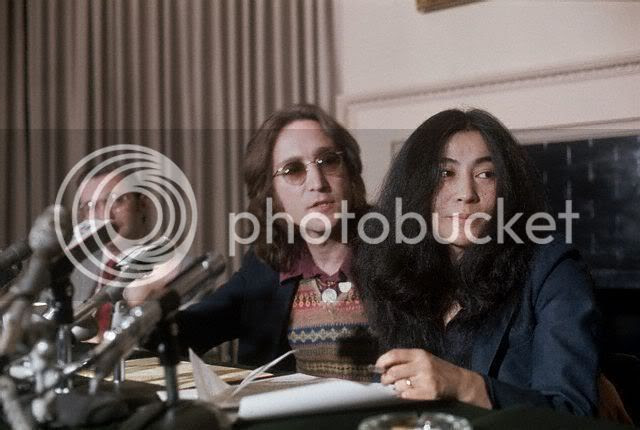 John and Yoko began 1973 facing yet another lawsuit, this time filed by Northern Songs/Maclen Music, who were claiming unpaid royalties on jointly composed Lennon/Ono compositions. As had happened with Paul and Linda's co-written numbers on Ram, the people who owned the rights to Lennon and McCartney songs wanted 100% of the income, claiming that to give their wives 50% credit was a ruse to retain half the money.
Having tired of the legal battles, political hassles, and immigration fights, and at a low point in their personal relationship, John and Yoko decided to make a fresh start, moving out of their Greenwich Village apartment and buying one in the Dakota building. During the move, they spent a few weeks in Los Angeles, arriving in early February. Yoko kept busy promoting her new LP Approximately Infinite Universe, including a telephone chat with Johnny Moran for BBC Radio's Scene And Heard.
More bad news arrived from New York on March 23rd, when INS judge Ira Fieldsteel handed down a decision they had been dreading: Yoko's visa application was approved, but John's was denied, and he was ordered to leave the US within 60 days. Government lawyer Sol Marks announced the decision at a press conference, where the Lennons' lawyer Leon Wildes fielded questions about his next move.
John and Yoko's response was suitably Conceptual. On April 2nd, they flew back to New York and held their own press conference, declaring themselves ambassadors of the new country Nutopia (and thereby eligible for diplomatic immunity).
On April 6th, they were back in Los Angeles, videotaping an interview with John Fielding for the London Weekend Television series Weekend World (aired in the UK two nights later). Most of the chat centered on John, George, and Ringo's March 31st decision to cut ties with Allan Klein and ABKCO, with John being careful to note that it doesn't mean a Beatles reunion is imminent.
John expanded on the subjects of reunions and Klein during his April 16th interview with Elliot Mintz at the Beverly Hills Hotel. Yoko also plugged her new LP, but most of the lengthy discussion focused on John, who talked about his recent session with George and Ringo, two Hollywood parties they had attended, primal therapy, drugs, his feud with Paul, and his marriage to Yoko, which they claimed was stronger than ever.
Posted by DinsdaleP at 4:36 PM