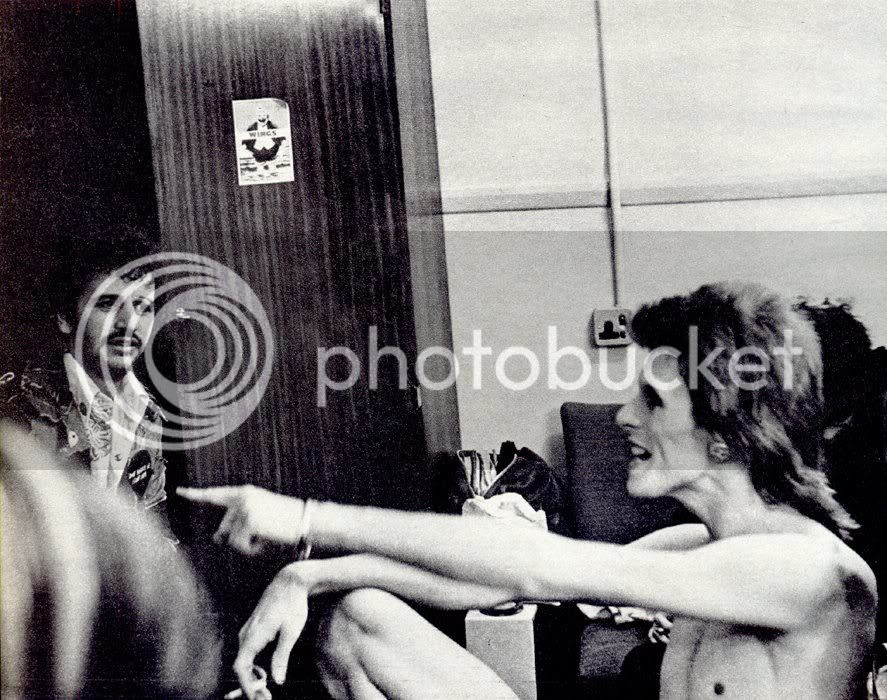 1973 turned out to be the busiest year ever for ex-Beatle releases, with the issue of five albums plus two non-LP Wings singles. Most of these came towards the end of the year, and Ringo was first out of the gate with the single "Photograph" on September 24th in the US.

The song topped the Billboard chart, giving Ringo his first American #1 hit; in the UK, the single was delayed until October 19th, but also fared well, peaking at #8. It was helped along by a promo clip filmed at Tittenhurst and aired on Top Of The Pops November 1st:

Sessions for the Ringo LP were completed in London in July, with mixing to follow in Los Angeles. Ringo and Maureen (whose marriage was on its last legs at this point) found the time to attend David Bowie's "farewell performance" as Ziggy Stardust at the Hammersmith Odeon on July 3rd (note the sticker in the photo above promoting Wings' shows there from five weeks prior), and found themselves in the concert film Ziggy Stardust and the Spiders From Mars:

Elsewhere, just prior to their trip to Lagos, Nigeria, Henry McCullough and Denny Seiwell dropped out of Wings. Paul, Linda, and Denny Laine (along with Geoff Emerick) decided to carry on as a trio and spent most of August and September at EMI's Nigerian studio, as well as ARC in Ikeja, owned by Ginger Baker, who can be seen in home movies from the trip:

The first release from these sessions was the single "Helen Wheels", backed with a 1972 recording, "Country Dreamer". It came out October 26th in the UK, accompanied by a promo clip which aired on Top Of The Pops November 15th:

"Helen Wheels" reached #11 in the UK, and #10 in the US where it was released November 12th. Capitol executive Al Coury persuaded Paul to add the song to US copies of Wings' forthcoming LP, reasoning that including a known hit single would help to boost sales. As it would turn out, Band On The Run needed no such help.

Posted by DinsdaleP at 1:45 PM