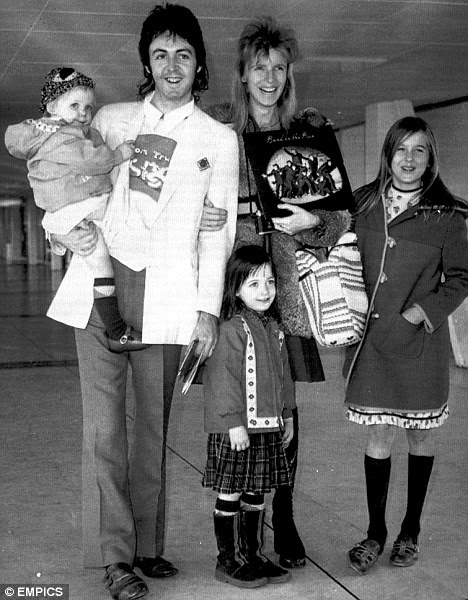 After wrapping up the Band On The Run LP, Paul, Linda, and Denny flew to France in mid-November 1973, where they spent a couple of days at EMI's Paris studio. Filling in on drums was Davey Lutton, and playing lead guitar was Jimmy McCulloch, who would soon join Wings on a permanent basis. In addition to working on a few "Suzy and the Red Stripes" (aka Linda and Wings) numbers, the group taped a special jingle for Radio Luxembourg, incorporating the titles of several numbers from the new album.
Upon their return to London, Paul and Linda spent a couple of weeks promoting Band On The Run, including a visit to the studios of Capital Radio on November 24th. Despite being served with a $20,000,000 writ just before he entered the room, Paul was in a silly mood as he interacted with Kenny Everett, Dave Cash, and listeners who called in.
Paul also sat down with music journalist Paul Gambaccini to discuss Band On The Run for an interview aired on BBC Radio 1's Rockweek November 30th. The two Pauls actually met for several extended chats over the next few weeks, and the results were published in Rolling Stone the following February, and eventually in a book, Paul McCartney In His Own Words.
The Band On The Run LP was released December 3rd in the US (promoted with a 60-second radio spot) and four days later in the UK. It proved to be a slow but steady seller, hovering around the low end of the top 10 in both countries through March 1974. When the title track was eventually issued as a single (April in the US, June in the UK), that gave it the extra nudge to hit #1 in both countries.
Posted by DinsdaleP at 2:52 PM