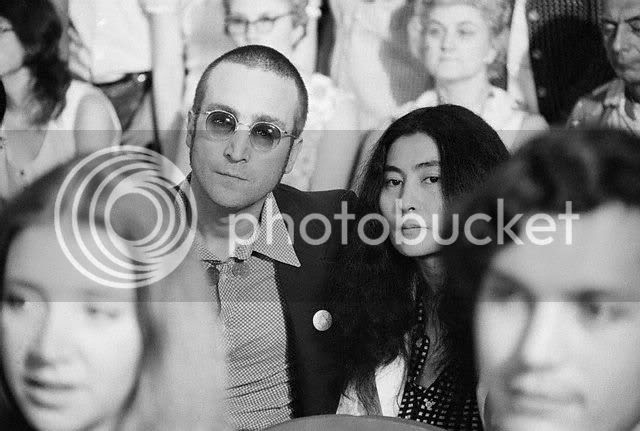 With John mired in a songwriting slump, the suddenly prolific Yoko took up the slack. Following the double-LP release Approximately Infinite Universe at the start of 1973, she released a Japan-exclusive single, "Joseijoi Banzai", and began stockpiling songs for a follow-up LP, Feeling The Space.

On May 12th, she and John videotaped a TV special at the Record Plant in New York, being interviewed and performing songs from the LP and single backed by Elephant's Memory. It was broadcast June 30th as an episode of Flipside, a syndicated TV music series.

Yoko performed her first solo pop concert on May 20th at New York's Town Hall, a benefit for WBAI radio. Once again, she was backed by Elephant's Memory, but John was nowhere to be found. The two did travel together to the First International Feminist Planning Conference, held from June 1st through the 4th at Harvard University.

Obviously, Yoko was at the forefront there too, and her performance of a new composition, "Coffin Car" (backed by John on guitar), was released as a bonus track on the Feeling The Space CD. When WBCN reporter Danny Schecter interviewed the couple on June 3rd, the conversation drifted from feminism to the immigration situation and the recent Beatle reunion rumors.

The March 23rd ruling gave John 60 days to leave the US voluntarily, but of course his lawyer Leon Wildes immediately appealed the decision, continuing the cat-and-mouse game with the government that would drag on for a few more years. Naturally, John had been following the televised Watergate hearings closely, and while visiting Washington DC on June 27th, couldn't pass up the opportunity to attend John Dean's testimony in person, sporting a newly-shorn scalp.

Posted by DinsdaleP at 1:42 PM