Half A Scotch Egg 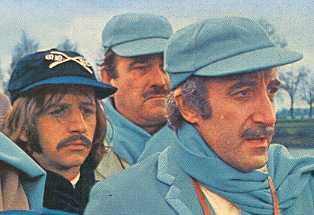 Ringo's first major film role was Youngman Grand in the movie adaptation of Terry Southern's novel The Magic Christian. He and co-star Peter Sellers spent much of February-April 1969 filming the movie on various locations in London and at Twickenham Film Studios.
Concurrent with the film's production, Tony Palmer directed a documentary, Will The Real Mr. Sellers..., for airing on BBC December 18th to promote the movie's release. Here are some brief excerpts from the documentary, with Ringo and Peter playing wine connoisseurs, and Paul falsely denying Linda's pregnancy.
Will The Real Mr. Sellers...
Posted by DinsdaleP at 2:44 PM