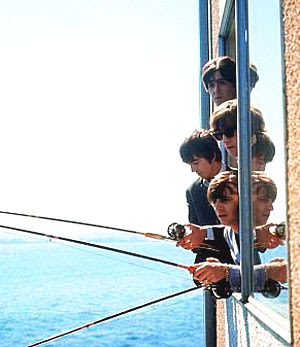 Seattle, Washington was the third city on the summer 1964 North American Beatles tour.
When they landed at Seattle-Tacoma airport on August 21st, local TV news was there to film a few words from Paul. So was Larry Kane, who chatted with Ringo as he deplaned.
Kane also spoke with press officer Derek Taylor and interviewed fans hanging around outside the Edgewater Inn, where the group stayed and fished out the window of their suite overlooking Elliott Bay in Puget Sound.
Prior to their show that night at Seattle Coliseum, The Beatles met the media for a typical press conference, livened only by John's reluctant reading of his poem "Good Dog Nigel".
Posted by DinsdaleP at 2:19 PM