We'll All Die Of Failure 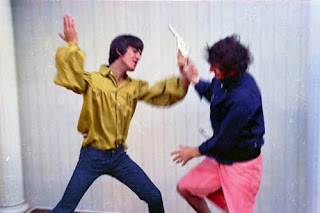 During their August, 1964 visit to Southern California, The Beatles rented a secluded mansion in Bel-Air from British actor Reginald Owen. As George and Ringo cavorted poolside on the 24th, John and Paul were inside recording several promotional items for Capitol Records.
The composers taped intros for a DJ single containing two of their songs given away to Cilla Black and Peter and Gordon, and Paul contributed some half-hearted song intros to a Veterans' Administration radio series, Here's To Veterans.
Both of the above were produced by Capitol's Jack Wagner, who also interviewed John and Paul more in-depth about their songwriting process and early career. The result was used in two places, with different edits:
Silver Platter Service
Teen Set magazine
Posted by DinsdaleP at 7:47 PM