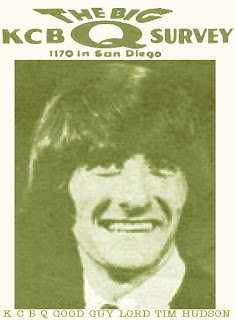 "Word of the Beatles coming to perform in San Diego had already charged up the promotion machines of the local radio stations. KCBQ and KGB moved hastily to corner the competition for exclusive sponsorship rights. Such a prestigious honor might mean a share of windfall concert profits, an extra rating point or two in a highly competitive market, or perhaps exclusive rights to early releases of future Beatles hits.

KCBQ moved quickly to bring an 'insider' onto the staff to aid their cause. This insider was a record producer named Lord Tim Hudson of Liverpool, England who professed to personally know the Beatles and to have helped discover the Moody Blues. As reported in AIRCHECK, The Story of Top 40 Radio in San Diego, the station housed Lord Tim at the El Cortez Hotel, across the street from the KCBQ studio, in downtown San Diego where he played host to many adoring fans.

Upon his arrival in May, KCBQ limited Lord Tim's role to using his Beatle look-alike appearance on weekly surveys, recording concert promos, and doing 'pop-ins' on shows for a few weeks to promote the event.

Written proposals for sponsorship rights were due by June 10, 1965. KHJ and KFWB vied for exclusive rights to promote the San Diego concert in the Los Angeles and Orange County markets. KHJ pursued a joint sponsorship with its sister station KGB. KFWB offered an intensive promotion campaign via spot ads and extensive DJ announcements throughout the broadcast day, and won the rights for Los Angeles and Orange Counties.

KCBQ owner and general Manager Lee Bartell touted the Lord Tim connection in his June 10 proposal, and made an exceptionally large promotion offer that would include a seven-week newspaper ad campaign, arranging news conferences, free broadcast time, produced announcements and interviews, contests with prizes of the Beatles tote bags, records, and magazines, and additional promotions should ticket sales lag.

KGB program consultant Bill Drake, in his proposal dated June 9, was less specific but more direct by saying to Beatles promoters, "In effect you would own KGB". Drake also offered a saturation of concert announcements, contests, and a newspaper ad campaign, and also touted the superior ratings that KGB enjoyed.

The concert promoters reacted first by seeking a joint sponsorship between KCBQ and KGB. KGB stated that they 'would rather share the promotion than not have any of it'. KCBQ not only declined, but proceeded to sponsor a Herman's Hermits concert in San Diego on August 7 that Beatles promoters deemed as unwanted competition to their show. These actions, coupled with audience ratings that were consistently higher than KCBQ, won KGB the sponsorship rights on June 15, 1965. As the official concert sponsor, KGB had DJ Ray Morgan traveling with the band and making regular reports aired exclusively on KGB. The station studio was the official address to be used for ordering concert tickets.

KCBQ, however, was not to be denied. Using his contacts with the Beatle managers in England, Lord Tim Hudson managed to get permission to also travel with the Beatles prior to the San Diego concert and to file reports to be aired exclusively on KCBQ. KCBQ proceeded to take out a full page ad in the San Diego Union-Tribune welcoming the Beatles to San Diego, using their phone number to get ticket information, showcasing 'Lord Tim of Liverpool' "joining KCBQ in welcoming his personal friends, the Beatles, to San Diego", and offering the pin back buttons to listeners declaring August 28 as official Beatle Day. DJ Tom Murphy of KCBQ also conjured up a local band called the "Beat-Alls" that traveled around town on a flat bed truck playing Beatles songs and giving away prizes. The station would announce where the "Beat-Alls" would be that day to encourage listener turn out.

KGB, fearing perhaps that their hard-won prestige was on the line, grew more irritated as KCBQ churned out more promotions. Attorneys for KGB wrote to KFWB on August 26 seeking their support to take legal action against KCBQ and Lord Tim Hudson. "...Raddio station KCBQ in San Diego, a competitive radio station to our client, has held itself out as being involved with the San Diego presentation of the Beatles. They go on to write that "it is our opinion that our client has been irreparably harmed by KCBQ's misrepresentations to the general public." "Our client has requested that we take immediate legal action to enjoin the introduction of Lord Tim at the concert."

What KGB did not know at the time was that KCBQ was having its own problems with Lord Tim Hudson. He had been on the payroll since May and the station demanded more of his services on the air in July. He was given a night shift with the understanding that he had some experience as a disc jockey in England. That did not turn out to be the case. A resident engineer was needed to operate the control board, play ads, jingles, and music, leaving Lord Tim the sole duty as master of ceremonies between songs. In radio circles, this did not wash.

The day of the concert arrived. Despite the spirited attempts by two highly competitive stations to promote the event, ticket sales, that ranged from $3.50 to $5.50, were lagging. The Beatles were greeted by over 50,000 fans at Shea Stadium in New York the week before. Was San Diego going to turn out less than 15,000 fans?

The Fab Four arrived by bus late in the afternoon from Los Angeles to attend a scheduled press conference. As the 8:00 PM concert approached, disc jockeys from not only KGB, but also KCBQ, KFWB, and K/MEN in San Bernardino vied for time on the stage to warm up the crowd. Among them was the irrepressible Lord Tim Hudson. The sheer number of speakers made the crowd restless as they screamed for the Beatles. Soon, the opening acts were on the stage. Brenda Holloway, the King Curtis Band, Cannibal and the Headhunters, and Sounds Incorporated each did their set.

Finally, the Beatles appeared. They played their standard set opening with Twist & Shout, then She's a Woman, I Feel Fine, Dizzy Ms. Lizzie, Ticket to Ride, Everybody's Trying to be My Baby, Can't Buy Me Love, Baby's in Black, Act Naturally, A Hard Days Night, HELP!, and I'm Down. As the Beatles left the stage to the sounds of cheering fans, Ringo Starr handed a drum stick to a police officer who was securing the stage. After a meeting with Joan Baez, the Beatles were back on a bus headed to Los Angeles that night. The visit and the event was over in a flash. Newspaper stories described the concert as "Ecstasy and Emotion as Beatles and Beatlemania Erupt at Balboa Stadium" The concert electrified the audience, although those who traveled with the Beatles felt they performed with less zeal than in other concerts. This would be the only live concert appearance by the Beatles in San Diego.

Now it was time to settle accounts. The event was nowhere near a sell-out. Between 17,000 and 18,000 fans turned out for the concert in a 28,000 seat stadium. Gross receipts totaled $83,000. The Beatles entourage were guaranteed $50,100 for their appearance. After expenses, the net proceeds were less than $6,000. Those hoping for a financial windfall resulting from the appearance by the most popular group on the planet barely broke even.

Despite the intense competition for sponsorship rights and all of the promotional maneuvers leading up to the event, on the night of the concert, the only names that mattered were John, Paul, Ringo, and George. The importance of who was the sponsor was lost in the balmy evening amid thousands of screaming teens. KGB would continue to dominate the local Top 40 radio market for the next three years with its fast-paced format with fewer commercials and more music.

Lord Tim Hudson and KCBQ parted company within two weeks after the concert, and found a new home at KFWB on September 15, 1965. He would find his calling, not in radio, but in other venues of the entertainment industry. His credits now include former DJ, actor, sports star manager, and multi-millionaire hippie known for his panama hats, rainbow colored blazer, and ponytail living in Cheshire, England. There were no lawsuits. Hard feelings were swept away like waves across the sand as San Diego returned to its laid-back beach lifestyle in the summer of 1965."