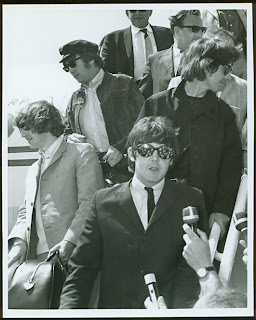 On August 31st, 1965, The Beatles concluded their summer 1965 tour with two chaotic concerts at San Francisco's Cow Palace. News cameras caught up with them as they deplaned at the airport, far from the crowds. 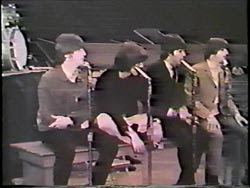 After the first concert, they held a press conference on stage. Here's a composite recording of the event from multiple sources:
Press conference
They also spoke with Cleveland DJ Jerry G. Bishop backstage before the hectic second performance. 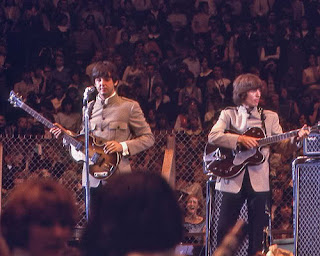 Fan interviews at the Cow Palace
After the shows, they unwound with singer Joan Baez and other visitors, including DJ Jim Stagg, who took the opportunity to chat with Paul and George.
Posted by DinsdaleP at 4:05 PM