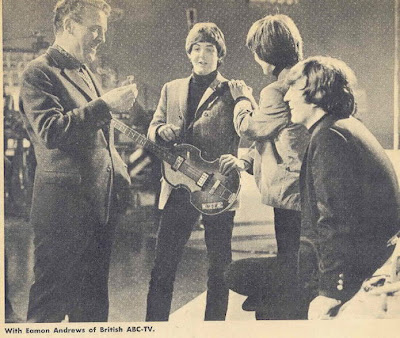 During the week of April 5th-9th, 1965, The Beatles spent their days filming Help! at Twickenham Studios. On the 6th, they received an award from Radio Caroline:

In addition to Caroline's Simon Dee, a DJ from Radio London interviewed the quartet on the film set; here is an interview excerpt with Paul from around this date, discussing the use of music in the movie.

The new Beatles single, "Ticket To Ride"/"Yes It Is", was released in the UK on April 9th, and the group spent the weekend promoting it. On the 10th, they videotaped an appearance on Top Of The Pops, miming to both sides of the disc. The original tape no longer exists, but half a minute was repurposed in a contemporary episode of Doctor Who:

On the 11th, The Beatles headlined the New Musical Express Poll-Winners' All-Star Concert at the Empire Pool, Wembley. The same night, they appeared live on ABC-TV's The Eamonn Andrews Show. In addition to lip-syncing both sides of the new single, they chatted for a full segment with Andrews and then appeared with panel guests Katharine Whitehorn and Wolf Mankowitz.

Posted by DinsdaleP at 1:31 PM