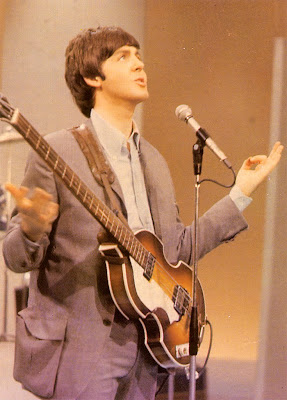 As covered in a previous blog post, the Beatles arrived in New York City for their 1965 tour on August 13th, holding a press conference at the Warwick Hotel and appearing on WABC with "Cousin" Bruce Morrow.

As he had in 1964, Miami reporter Larry Kane joined the group on tour in 1965, and he interviewed Paul, Ringo, and George following the press conference. Kane also chatted with roadie Mal Evans, who reminisced fondly about his greatest fights.

August 14th saw the Beatles tape their final performance on The Ed Sullivan Show, at CBS Studio 50, for airing September 12th to kick off the new season:

Shortly afterwards, Larry Kane spoke with Paul in an attempt to quash the latest rumor of his secret marriage to Jane Asher.

Posted by DinsdaleP at 4:33 PM