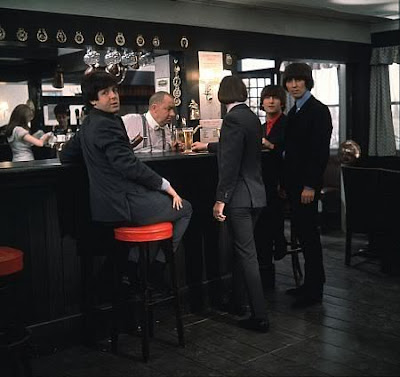 From April 15th through 19th, The Beatles took a break from filming for Easter weekend, interrupted only by John and George's TV guest spot on Ready, Steady, Goes Live!

Shooting for Help! continued the following week, highlighted by the title song performance on the 22nd:

On the 28th, Peter Sellers stopped by the pub set (seen above) to film an insert for American television. The Beatles had won a Grammy Award for "A Hard Day's Night" (Best Performance by a Vocal Group), and Sellers presented the band with their trophies; the clip would be aired on NBC May 18th.

On the 29th, disc jockey Chris Denning was on hand to stockpile more interviews for his Radio Luxembourg series, The Beatles.

Posted by DinsdaleP at 2:38 PM