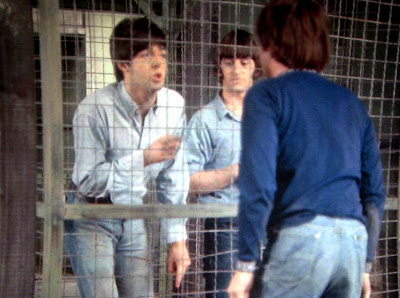 The parade of American DJs continued to march through Nassau as filming for Help! continued into March, 1965. Murray the "K" hung around for a week or so, taping interviews and hoping for a cameo role.
Fred Robbins of Radio Luxembourg stopped by as shooting wound down on March 9th, recording a bit of audio-verité during a swimming scene. He also talked with George and Ringo at great length for his Assignment: Hollywood series.
Here is a bonus Murray the "K" interview with George, circa 1965 (date unknown), talking about his relationship with Pattie Boyd.
Posted by DinsdaleP at 3:32 PM