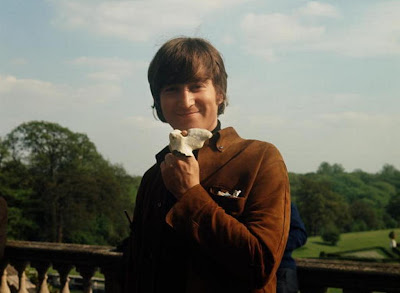 Filming for Help! was completed over the first two weeks of May, 1965. From May 3rd-5th, the musical numbers "I Need You" and "The Night Before" were staged on Salisbury Plain. On the 9th, location shots were captured around London, after which the Beatles and producer Walter Shenson were interviewed by Sandy Lesberg.

While they had been in a silly mood during that interview, the Beatles appeared to be stoned out of their gourds on the final day of principal shooting, May 11th. During filming at Cliveden House (standing in for Buckingham Palace), The Beatles participated in a relay race around the grounds of the estate, beating out a team of film crew members.

Visiting the set that afternoon was Buddy McGregor, a DJ from KNUZ-AM in Houston. Buddy announced the race for the benefit of his listeners, prior to conducting a cannabis-laced chat with John, Paul, and Ringo.

Posted by DinsdaleP at 1:43 PM