Acht Arms To Halten You 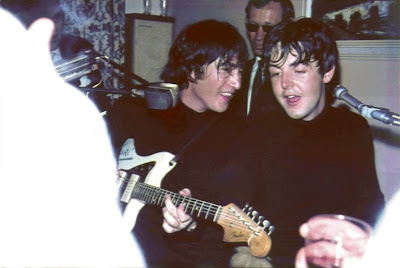 On March 10th, The Beatles left the sunny climes of the Bahamas, arriving back at London Airport early the next morning.

Two days later, they were back in the air, heading for Salzburg, Austria, to begin shooting ski slope and other snowbound scenes for Help! During their stay in Obertauern, they jammed with the house band during a late-night party at their hotel (see photo above), reportedly to celebrate Assistant Director Clive Reed's birthday.

By March 22nd, they were flying back to London, where the remainder of Help! would be shot over the next six weeks. Sometime around the start of April, Radio Luxembourg presenter Dieter Weidenfeld visited the set at Twickenham Film Studios. Together with his associates Monika and Norbert, Dieter chatted individually with all four Beatles, speaking in both English and German. George even sang and played a bit of a German pop song, while John crooned a line from "Komm Gib Mir Deine Hand"!

Posted by DinsdaleP at 1:28 PM